Well, Avenged Sevenfold’s album released earlier this fall, and there was misleading info about this album prior to its release. I want to set the record straight before I talk about more released music by these guys. First of all, it has a surprise release on October 28, 2016. Not on December 9, 2016 as originally anticipated. Also, it’s not entitled Voltaic Oceans. It’s actually entitled The Stage, which is also the name if its lead single. Now without further ado, let’s get to another song. 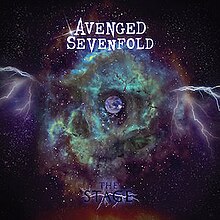 The second track of this record is entitled “Paradigm”. This particular song is about nanobots and how they are being used to cure diseases and help people “live forever”. At the same time, M. Shadows and Synyster Gates make the sone have the kind of impact that makes people question if they rely on these nanobots, then they will lose a majority of their humanity and become about 70% machine and 30% human. Lines that involve a father losing the boy that he once knew is just one out of many prime examples of that concept.

This song’s guitar work is in drop C# tuning. So, it is slightly darker and heavier in terms of instrumental sound. The verse riff takes on a more thrash metal approach by combining palm muting with many different low E string notes around the half of the neck of the guitar that’s close to the head. This song has more of a crazy thrash style of drumming, thanks to former Bad Religion drummer, Brooks Wackerman. He gives a crazy drumming style reminiscent to Jimmy “The Rev” Sullivan. The screams after the first two choruses are performed by bassist, Johnny Christ. This is proven by the fact that the screams are a little grittier than how M. Shadows does these days. There’s also just a feeling that I get where I think, “Oh ok. So, this is more of a backing vocals style scream,” which is the main type of backing vocals Johnny Christ is known for.

After the bridge is played out, the third and final chorus is slightly altered, both lyrically and musically. The last chorus has some lines that replace a couple lines that were included in the first two choruses. Also, unlike the first two choruses, when the guitars are played in chords with a metal/punk kinda style, guitar notes are played by holding slow tempoed low E string notes, while the pitch slightly gets higher. There are also keyboard notes being played by a guest musician named Jason Freese. This song is just one out of eleven masterpieces that creates this collage of progressive thrash metal awesomeness.