Guess who’s coming to Stage AE in Pittsburgh this summer? The band that was formed to play harder, faster, and louder than anyone else. Yes, I’m referring to Megadeth, one of the Big Four thrash metal bands of the 80’s. Megadeth was formed by guitarist/vocalist Dave Mustaine with first bandmate and bassist, David Ellefson. Despite a long time of rivaling Metallica, almost being forced to end his career after a major arm injury in 2002, several lineup changes, and 15 trips to rehab, Dave Mustaine continues to rock the legacy and brand of Megadeth while once again staying alongside David Ellefson after quite a few years of lawsuit related conflict.

How Megadeth started is quite a unique and interesting story, one that makes their visit to Pittsburgh even more meaningful. Dave Mustaine used to be one of the first guitarists for Metallica back in 1981-1982. Well, once he joined Metallica, his addictions of drugs and alcohol got the better of him, and was fired. He was actually fired as soon as Metallica reached New York from San Francisco, California. After 4 days on a bus back to L.A., Dave then formed Megadeth as a need for revenge.  Despite more troubles he had to conquer than humanly possible, now, according to the online Post Gazette, “Megadeth, one of the Big Four thrash bands, will headline Stage AE Outdoors on July 11 with Meshuggah, Tessereact and Lillake.” 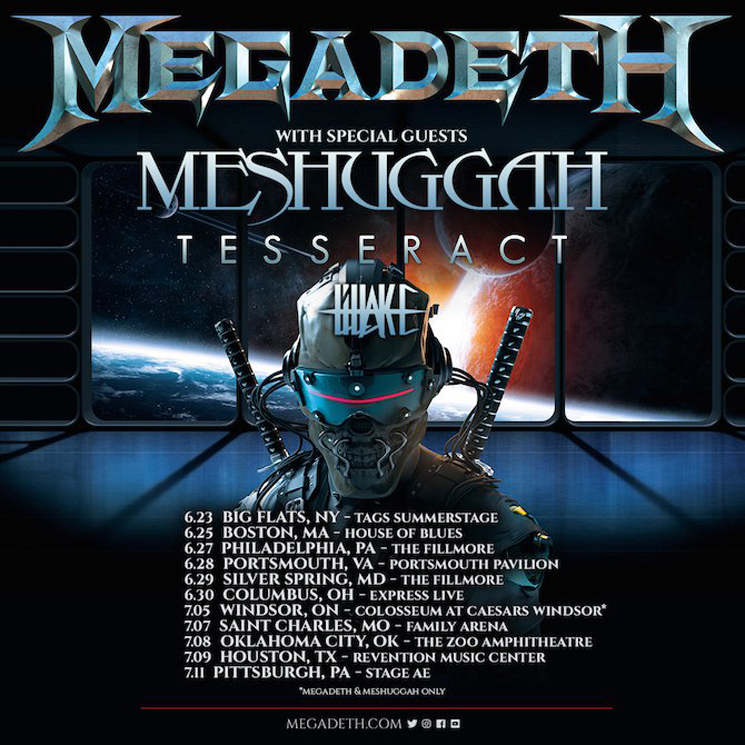 Meshuggah is a Swedish metal band that combines the elements of extreme metal, progressive metal, and avant-garde metal. According to wikipedia, “Meshuggah first attracted international attention with the 1995 release Destroy Erase Improve for its fusion of fast-tempo death metal, thrash metal, progressive metal and jazz fusion elements.” They utilize 7-string electric guitars to be able to achieve a way lower tuning without possibly destroying the strings of a regular 6-string guitar.

(Meshuggah performing in Melbourne live in 2008)

Tesseract is a British metal band that is mainly known for a style of metal that combines progressive metal with an extreme scream driven punk style known as djent. The name of this style comes from the sound of palm-muted distorted guitar work. However, they do not want to be identified as a band that is only known for screaming. They have melodic clean vocals incorporated too.

Lillake is a band that was formed by former guitarist of crossover thrash band, Suicidal Tendencies, named Nico Santora. Fans of the band should expect a different sound, more metal and less punk.

Definitely expect masterpieces during this once in a lifetime event, like “Holy Wars…The Punishment Due”. And who can forget their first song to be considered a thrashing classic: “Peace Sells”? So, get your tickets, and support possibly our future president, guitarist Dave Mustaine.